Details
Category: The Hotel
Published: 11 May 2016

The AKZENT Hotel and Görlitz

With regard to its listed buildings, Görlitz is one of the most important cities in Germany. The AKZENT (formerly the Sorat) Hotel Görlitz was one of the first historical buildings to be restored here to its former glory after the changeover to a market economy.

Discoveries in the new federal states: the Lower Silesian Görlitz, the most easterly city in Germany. Its picturesque towers and fortifications are situated above the Neisse, the river marking the border to Poland. Experts rate Görlitz as one of the most important historical conservation areas in the Federal Republic. Around 3,500 precious medieval buildings and ensembles form the core of the city, while the rest of the city centre developed primarily around the turn of the century.

The wonderful city remained entirely unharmed in the Second World War; however, forty years of Socialism left its mark. But as a model city, Görlitz also has access to additional funds from the federal government and the state of Saxony. More than eight hundred facades have since been restored, many of them in the old city. Specialists as well as visitors enthusiastically acknowledge the exemplary preservation of the cityscape in Görlitz.

The AKZENT Hotel Görlitz was one of the first hotels to be restored after the changeover to a market economy. Its smart art nouveau facade with the oriel tower overlooks the Marienplatz, situated directly in the heart of Görlitz. Built in 1901, the magnificent merchant's house was last used as a residential building.

However, it was originally envisaged by the merchants Finster and Hoffmann for their ironmongery store. The motives in the stucco on the facade bear testimony to this - iron in every conceivable form of use... The men had commissioned the well-known Görlitz builder August Kaempffer with the construction and he also worked on the neighbouring art nouveau department store.

The conversion of the building into a hotel was done with the active participation of the local listed buildings department. After work to the foundations took longer than expected, the building was opened in 1993. Since then, hotel guests have been able to enjoy the historical details - floor mosaics were repaired, the columns of the balustrade were reshaped, and the ceiling stucco in the rooms was restored to its original colours again as far as they were discernible.

Modern technology was installed, from a lift to smoke detectors. This has resulted in an extremely homely hotel in which modern comfort is combined with the charm of the old. 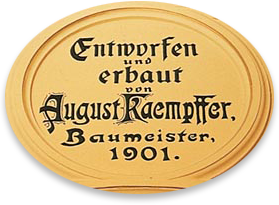 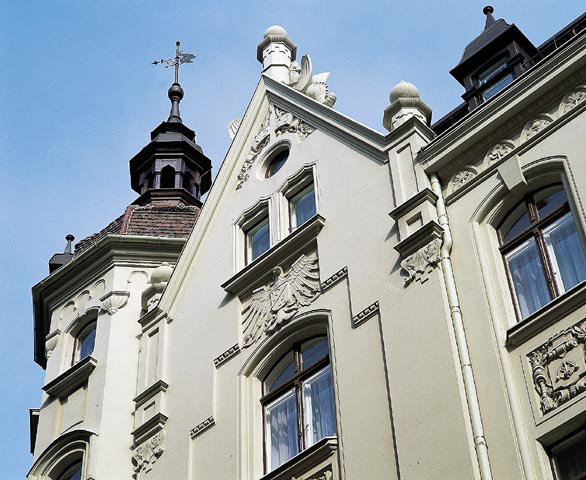 The stucco on the facade indicates that the merchant's house, which was built in 1901, originally served as an office for an ironmongery store. In close collaboration with the listed buildings department, the interior of the hotel has now also been restored to its former glory.From the oriel tower, you have a view over the Marienplatz with the medieval Fat Tower ("Dicker Turm") and right next to it the famous Görlitz art nouveau department store.The hotel owners Hermann and Roland Marth, together with their staff, look after every detail, to make your stay as pleasant as possible. This personal commitment is felt by our guests as soon as they enter the Hotel "Am Goldenen Strauss".
Each of the 46 rooms has a very individual design. From the representative oriel room to the cosy attic studio – all the charming and comfortable rooms and B&B invite guests to feel at home and relax. In the mornings, after your overnight stay in the hotel, a copious, varied breakfast buffet in the "Am Goldenen Strauss"restaurant will awaken your spirits.